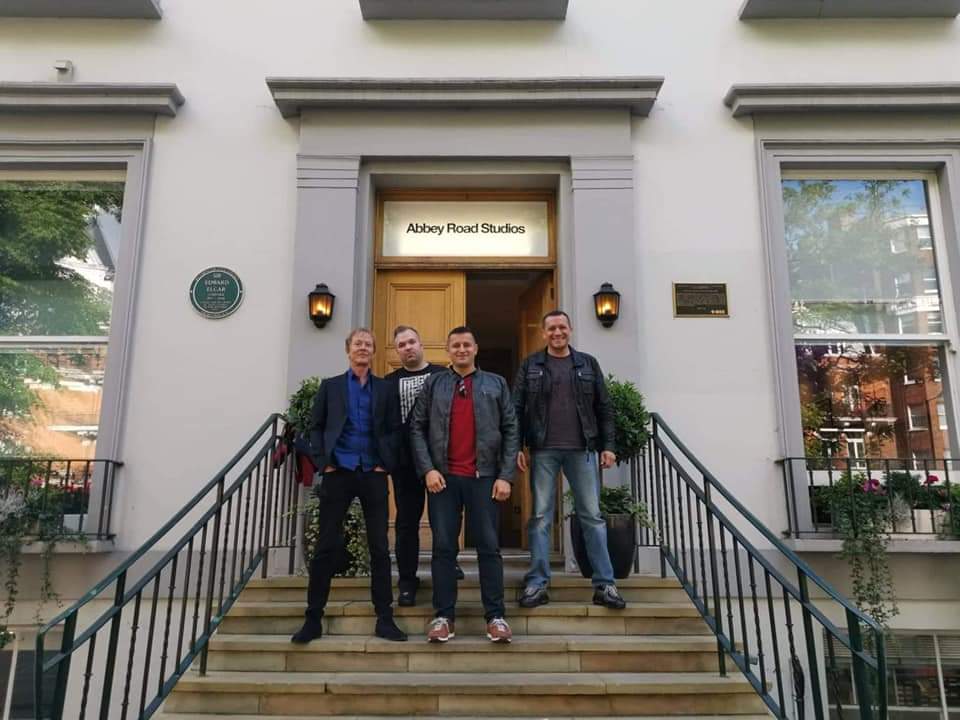 “Diamond and Laci have joined me on the trip to England, and it was a rather funny trip because Diamond was severely afraid of heights, so much that he lost the color of his cheeks as we stepped into the airplane, suspiciously examining the interior as if seeking technical flaws which might have suggested the potentials of an incident. When the plane took off, he looked at me as if he saw a ghost, his eyes turned glasslike, his voice cracked, and he insisted on trivial topics just to put his mind away from where he was. He loosened up, however, when we reached the stable travel altitude, avoiding visibly the sight through the window, even though the only thing he could’ve seen was a scattered pattern of dense cloud pillows. And halfway through the journey, when there was slight turbulence, Laci and I glanced at each other, giving ourselves a signal, and then we faked as if we were in some serious trouble, gripping the seats with both hands, turning around as if having sat on a wasp’s nest. Whatever color Diamond was left with on his face was now entirely gone, as if bleached, while we couldn’t help but laugh.

Even though I haven’t been there ever since my solo tour, about a decade passing by like a day, in London I felt as if in the comfort of my home. I led the team as we went to Hard Rock Café for a drink, had a classic English dinner; fish and chips with mushy peas, and then withdrew to our humble hotel for a stay. In the morning, we had a coffee and breakfast at Pret A Manger, then headed to the metro for a ride towards St. John’s Wood station, from where we walked until we found the legendary Beatles crosswalk. Having taken a few photos, we walked a dozen more steps northward, where a bunch of passers-by have gathered by the fence and photographed the iconic music recording studios where we had our mastering session booked. There was a certain sense of beatitude while entering the premises, which must have come from an endless list of world-changing artists who had therein created their ageless music.

We waited patiently for Frank to arrive, as he was slightly late due to unforeseen circumstances. That was fine because it gave me time to think about what drive I had so I could push it all the way here, and yet not having a serious promoter stand behind the music so it could reach its audience. The voices from the inside spoke that I was on the right path, except there was that subtle question of what should be changed, who had to be approached, and what had to be done so this luxurious hobby would become a steady business. I felt like I could have and maybe even should have been here way before … if only I had found an easier way to make it.

Frank Arkwright arrived in style, walking hurriedly towards us and politely introducing himself, apologizing for the delay. He was a positive, bright man whose attitude immediately made me feel that we were in the right hands. We followed him to his studio room like three hungry dogs, appreciating each and every corner of this building. Hundreds of award-winning vinyl plates hung upon the wall, challenging you to become someone better and do something beyond your common limits. We sat on the sofa while he set up the project and started working on the tracks Diamond mixed perhaps a couple of days before. While the system was loading, he brought us to the vending machine, where we got ourselves some drinks. He got himself a large mug of coffee, which I perceived as a part of his routine, while I felt like doing the same thing, only to stumble and spill it all over the hallway floor. ‘What an idiot,’ I thought, ‘the first thing you do here is … this,’ and I sourced some tissues to wipe it off before anyone sees me. Having cleared my mess, I entered the studio, where Frank was finely accommodated on his chair; the chair that knew far better than anyone alive the songs and albums he had mastered, and the musings that he had while doing his job. He spoke hardly anything as he brought the first couple of tracks to their maximum quality, except delivering praise on our singer, saying that on Try To Find The Hope he sounds like Chris Cornell. After the third track, he needed a break, so he invited us to the canteen for lunch.

At the canteen were plenty of very tasty food options and at an affordable price. Eating, we broke the barrier of professionalism and spoke with Frank about his rich production background, especially the days of working for Pink Floyd. To our surprise, Nick Mason was sitting at the other table. He must have been recording for one of his projects, and a simple glance at his eyes would tell you much about his story. He had a lot to tell, some things most likely without any words. The sheer eye contact with him inspired me, as I will have later written a song There’s Nothing Around, reminiscing the clash of our artistic spirits. Frank often asked about touring. He was genuinely intrigued about where we toured, and I didn’t really know what to say to him, except that I hoped the success of these songs might make way for the concerts. This reminded me how badly I was missing being on stage and playing for an audience. Even if creating music in the studio has satisfied me, it could not compare with playing live, not even in the slightest bit; the real-time exchange of the stage energy is a near-divine experience, achievable only when the mastery of music merges with the listeners’ hearts.

Sitting behind our renowned mastering engineer, I poignantly doused within my thoughts, realizing that we desperately needed to shift our efforts from music- and video-making into live performance. It was obvious that I had to do that if I wanted the band to truly come alive. Otherwise, it would have been a dead letter on paper, accompanied by the eternal songs which nobody would ever hear. The situation was far from ideal, considering how much I had invested in this project by that time. The situation was even worse if I thought about the band as what they mostly were; session musicians who hadn’t the same luxury as me, of time and money, that would allow them any deeper involvement from what it was at that time. I was the lone traveler climbing the mountain, now doubting I was aiming from the wrong peak. My bandmates helped as much as they could and knew, and the people I had worked with so far have done what they thought was the right thing or the most appropriate thing to do considering the budgets. Being at Abbey Road Studios was an eye-opening experience for me, which struck me with the truth about the irrelevance of in-studio work unless I somehow restored my touring practice. With a nicely-sounding material in my hands, I came home with my head full of thoughts, looking at everything around me that now seemed lackluster … as if it belonged to the past. But that past, no matter how rigid, hollow, and torn, was my past. It was the proving grounds of the major plans I started developing for my future, by far more aligned with the content of my heart and my soul.”

© 2022 Through Infinity. Created for free using WordPress and Colibri